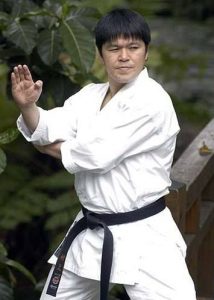 His first instructor was Maruo sensei, a JKA instructor who later on followed Kanazawa Soke when SKIF was established. Maruo sensei was a student of Miyata Minoru sensei who was the assistant chief-instructor of the JKA under Nakayama Shihan. So basically Murakami had a good starting point to learn karate.

As a teenager he met Kanazawa Soke several times and was very impressed by him. His admiration for this karatemaster made him decide to follow exactly the same path.

Since Kanazawa Soke had graduated from Takushoku University, Murakami moved to Tōkyō at the age of eighteen years old and entered the same karateclub were so many names of the Shōtōkan karate world had once studied.
The training was under Tsuyama Shihan, who by the way lost in the final of the  1st ever All Japan Championship against Kanazawa Soke in 1957.

Some of his classmates and senpai from Takushoku University have also made a name for themselves in the Karateworld. Mr. Naka, Mr. Taniyama, Mr. Kokubun, Mr. Akita,….

During his university years Murakami shihan could not compete so much, because there had been a fatal accident at the university karateclub. So the club was banned from entering competitions.

After graduating from Takushoku University he decided to enter the SKIF instructor’s course. The teaching was not only done by Kanazawa Soke but mostly by Kasuya Shihan. Kasuya Shihan was a very strict teacher and never smiled.

Manabu Murakami competed in SKIF since he was a teenager and won the SKIF All Japan Championship many times. He also became SKIF World Champion in kumite in 1991 (Mexico) and in 1994 (Yokohama).

As SKIF continued to expand internationally, Murakami Shihan started traveling all over the world. On many occasions together with Kanazawa Soke.