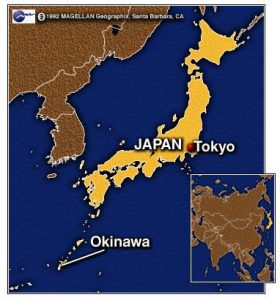 Although it is widely acknowledged that karate dō developed from fighting systems originating in China, there are few documents in existence that can verify the exact process in which this took place. In 1392, over 500 Chinese migrated from south China to Okinawa, and established a community in the area known as Kume. They introduced Chinese culture to the Ryukyu people, and it is thought that a number of Chinese hand-to-hand combat practitioners were also in this community.

Much later on, the Qing dynasty military envoy, Kushanku, an expert in the martial art of Ch’uan Fa, around 1756 introduced it to Okinawa.

When Shimazu Iehisa of the Satsuma clan invaded the islands in 1609 all weapons were confiscated from the locals. Ryukyu (Okinawa) was still allowed to maintain its tributary relationship with China, but the prohibition of weapons was strictly enforced for the next 250 years. The training of hand-to-hand combat was conducted secretly as the Satsuma authorities intensified their policies of disarmament and keeping control over the Ryukyuans.

There are many theories surrounding the roots of the term “karate”. It is unclear who was the first to use the word and when. However the ancient Ryukyuan fighting system was originally referred to as “te”, and the standard assumption is that “kara-te”refers to the martial techniques learned from China. (kara = China)

Whatever the case, it is clear that karate evolved in Okinawa under considerable Chinese influence. Over time, the once secret techniques became widespread throughout Okinawa. In 1905, Itosu Anko introduced karate into the school curriculum in Okinawa.

Karate was first seen on the Japanese mainland in 1916-1917 when the Okinawan schoolteacher Gichin Funakoshi gave a public demonstration at the Butōkuden in Kyōtō. In 1922, the Ministry of Education conducted the first Physical Education Exp 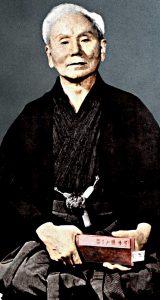 osition in Tōkyō, to which Funakoshi was invited to demonstrate the Kushanku-no-kata. Kanō Jigorō, the founder of Judō, even requested Funakoshi to show kata and kumite to the members of the Kodōkan Judo Institute. Funakoshi remained in Tōkyō to teach karate from then on.

Apart from Funakoshi, other karatemasters came to mainland Japan. These masters created over 100 different schools of karate both in Okinawa and mainland Japan.

Among them Shōtōkan, Shitō-ryu, Goju-ryu and Wadō-ryu are the most succesful in terms of the number of students and are referred to as the “great four” schools of Karate dō.

University clubs were at the forefront of karate’s popularisation in mainland Japan. The educational potential of karate was soon acknowledged, and its designation was changed to “karate-dō” to underscore its moral education, and its potential as means for self-perfection. (kara = empty)

From the beginning of the 1960's, most karate organizations dispatched instructors all over the world. Mr. Kanazawa Hirokazu was first send to Hawai and later on to Europe to teach “Shōtōkan karate”.